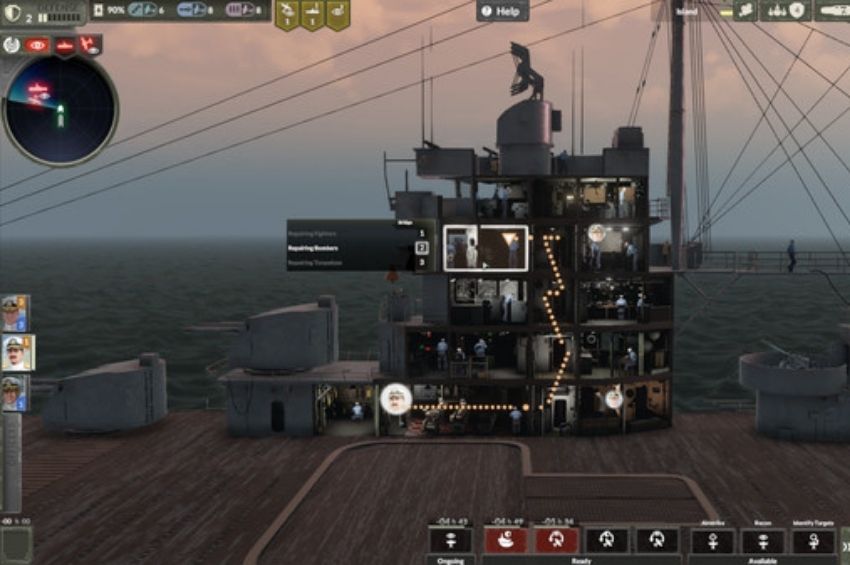 Aircraft carrier survival gameplay When the harshness of the sea meets the cruelties of war, a challenge for perseverance makes itself known. And it is like none other. Welcome to Aircraft Carrier Survival, a simulator set in the merciless reality of World War II, where your prowess as a commander decides the fate of a naval behemoth

If you like war-themed games, Aircraft Carrier Survival puts you in charge of an aircraft carrier, its crew, officers, and planes as you choose the right equipment, crew, and escort for each mission. Your success will depend greatly on your flexibility in managing the available fleet resources.

You must focus on making the best decisions to survive in a hostile environment in the middle of the ocean. Use maneuvers, aircraft, anti-aircraft turrets, and whatever else you can to survive the enemy attack.

Aircraft Carrier Survival is a strategic simulator set during the Second World War, in which we play the role of the commander of a powerful aircraft carrier. The title offers extensive gameplay, requiring many different decisions to be made. The Polish studio CreativeForge Games (the devs of Phantom Doctrine, Hard West, or Ancient Space) is responsible for the development and release of the title.

In Aircraft Carrier Survival our task is to efficiently manage an aircraft carrier. The gameplay may evoke associations with such games as Fallout Shelter or This War of Mine. We often observe our ship from the side (from the side-scrolling perspective), clearly seeing what is happening in individual rooms.

The game consists mainly of making decisions and giving orders to crew members. We must also take care of our ship from a broader, strategic perspective – we must take care of the morale and recruit the right people for various positions. The completion of further missions also requires the pursuit of their specific objectives.

The real game takes place when our ship takes part in a battle. We must then deal with the consequences of enemy attacks – extinguish fires, repair damage resulting from air and torpedo attacks, and cut off sections filled with water. The danger can also appear on the ship itself – in the form of saboteurs, revolts, and even nervous breakdown of crew members.