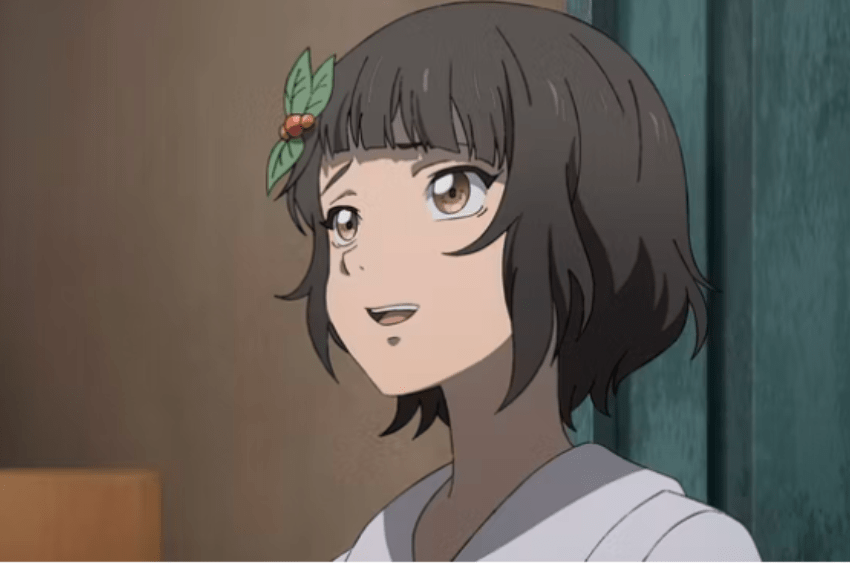 This new episode contains a lot of content that expands on the introduction, but there are also other elements that lead to unusual developments.

If the focus of Housing Complex C’s first episode was on creating the scene and introducing the cast, it would be fair to say that the second episode focused on developing the mood and themes. The role of the new tenants who are from outside of Japan is one of the major topics given more prominence in this episode, and their adjustment to the isolated setting of the complex as outsiders is one of the most intriguing, character-driven aspects of the series thus far.

Additionally, some aspects of the terror are explained in relation to ancient traditions associated with the location, which take on an almost folk-horror dimension. These elements are naturally explained by Kimi singing cryptic song lines to Yuri in crayon drawings reminiscent of anime, yet they create an intriguing thematic dynamic.

While some of the complex’s occupants are adjusting to the contemporary behaviors of the segregated community, friction seems to be growing over things that are even more antiquated that are lurking in the shadows.

Like in the first episode, there is sometimes a propensity for the music and voice acting to influence the scene’s tone more than the underlying plot would suggest. It’s difficult to shake the feeling that the exact same scenario would be played for laughs if lifted a little further down the block to an episode of One Piece. As an illustration, one scene of the old men of the complex eating live shrimp together is scored and edited in a way to create a sense of unease from the different characters’ observations.

Some scenes work much better at evoking unease than others, such as when an animal carcass is discovered dropped into the syrup of a party made with shaved ice, which is both more ominously disturbing and a better reference to the theme of scattered animal remains found throughout the second episode and, more generally, in the picture of the dead mummified dog unveiled in the first episode.

The second episode includes some of the major themes from the first one, but given what we’ve seen so far in the first episode, some of the explicit supernatural and horror elements feel underexamined. The creepy basement that Kimi and Yuri discover them in is rarely mentioned in the second episode, despite the previous one seeming to drum it up as the main source of the show’s horror. Neither are the bizarre, Lovecraftian scribbles left by the complex’s unnerving shut-in.

The monster that is glimpsed in characters’ eyes at one point is almost ever mentioned again, and the tension that might have been focused on it is instead turned toward…old men eating shellfish.

The best way to tell the difference between a feature film and a miniseries that is roughly the same length as a feature film is by whether or not these plot points are mentioned. A miniseries’ slow pacing feels more noticeable due to the immediate, segmented nature of something made for a weekly television block.

This tale and episode have a lot to keep viewers interested, and the horror, despite occasionally seeming like it’s being tugged in a number of different places, does a fantastic job of doing so. Housing Complex C is undoubtedly a mystery as well as a horror, and what’s the point of a mystery if it can’t be solved in more than one way? With that in mind, the final two episodes of the four-episode miniseries will need to efficiently use their time to progress the plot and secure the ending.