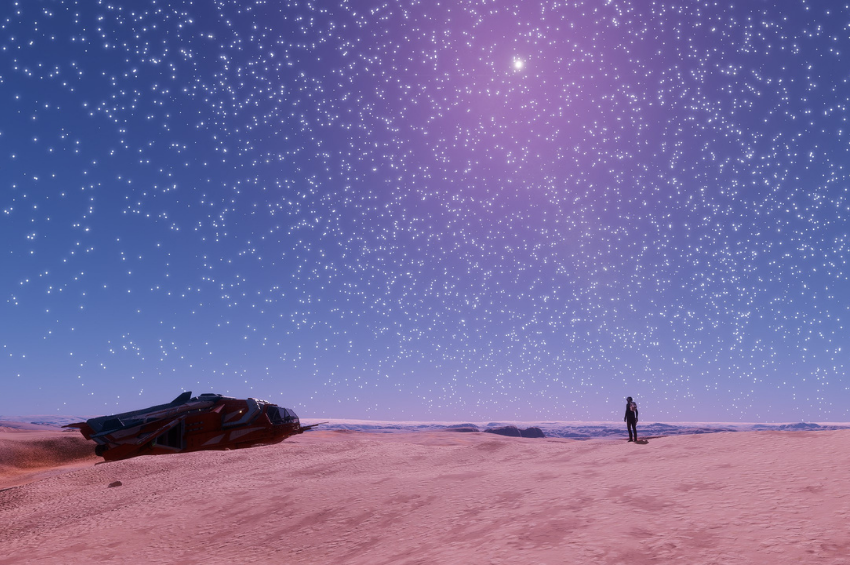 I’m standing on a rock that no person has ever touched, 22,500 lightyears from Earth. Three stars bake the world’s golden dust, while another hovers in the sky, waiting. The mountain range continues all the way to the horizon, where it turns ashen white as polar ice takes its place. To get here, it took weeks (actual, real-time weeks) of travel.

I get an assault rifle if I push 2. I’m half a galaxy distant from the rest of civilization, therefore the idea is ridiculous.

This week marks the one-year anniversary of Elite: Dangerous Odyssey, a spacefaring expansion that promised the impossible: the ability to step outside your spacecraft and walk on the surface of billions of planets.

It’s a huge promise, and one I was eager to accept. I’d been watching Elite’s worlds from afar for years, only seeing them through thick cockpit glass. My heart sunk when the launch videos emphasized Elite as a team deathmatch, and it sank even more after participating in alpha tests that only allowed you to go from fight site to combat site through painfully delayed taxi shuttles.

More alpha periods exposed us to lifeless mannequin NPCs, but they never truly addressed the underlying problem of trying to make Elite into an arena shooter. Guns are a pain to use, combat is meaningless (often literally), and outpost battles usually consist of hordes of brainless NPCs meandering between capture sites with shotguns. It isn’t really good.

Odyssey was, of course, incredibly buggy and broken upon release, to the point where studio founder David Braben publicly apologized for its poor quality. But it had been a while since the expansion was released, so this year I began dipping my toes back into Odyssey to see if the ill-fated addition had able to redeem itself.

Readers, the fighting is still terrible. I had just completed a 14,000 lightyear journey to Colonia, a small inhabited space hub near the galactic center when I last logged out. There are outposts to battle over even out here, so I boarded a drop-ship to join the action.

All of my complaints about Elite’s fighting were still valid. But it felt all the more frivolous in the context of where I was and what I’d done to get here. I was killing people with a shotgun in a warehouse on the outermost extremities of human exploration, with skies painted purple with stellar nebula and an insane density of stars. I could play any FPS made in the last 30 years if I wanted to shoot men with a shotgun in a warehouse.

It’s a complete lack of imagination, yet it fits with Elite’s overall trajectory. Elite Dangerous features a 1:1 scale model of the Milky Way, but it’s never quite figured out how to fill it, so it’s thrown in factional power struggles, market manipulation, reputation grinds, bounty hunts, and now boots-on-the-ground shooting. Some of these are good, and some are even entertaining, but they’re all ultimately superficial.

They overlook the reality that Elite’s biggest feature is the capacity to look up at the sky and realize that every single speck of light is a destination. It’s an awe-inspiring, existentially terrifying sensation that captures the vastness of space in a way that No Man’s Sky’s quintillions of procedurally generated planets can’t.

That is why, despite all I’ve just said, I adore Odyssey. I adore being able to finally leave my Diamondback and explore eternity through the eyes of a human. Realizing that these planets are truly planet-sized and that even traveling to the mountains on the horizon would take hours, if not days.

I’ve since left Colonia, along with all of its useless tiny deathmatch boxes, and am on my way to Sag A* (which was photographed for the first time this month). It’ll be another long journey, but I’m excited to keep going because I’ll be able to stretch my legs under stranger and stranger skies whenever I need a break.