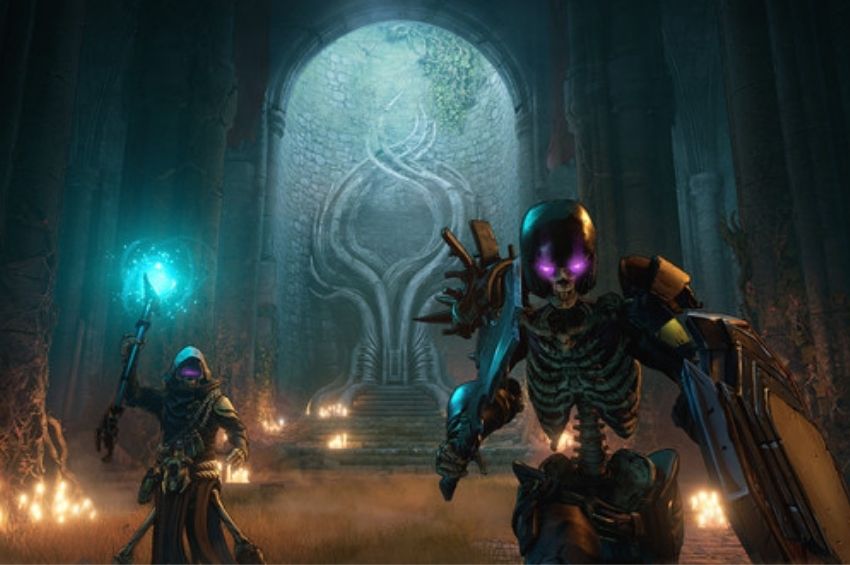 Tiny tina’s wonderlands volatile weapons: Danger lurks around every corner, so take heed, noble warrior, and arm yourself with a big ol‘ boomstick. Spellcasting and melee combat is all well and good, but when your back’s against the wall, you can always count on guns. Shooting and looting are the essences of Tiny Tina’s Wonderlands, so it’s crucial that you get to know the high-powered weaponry you’ll be working with.

There are millions of different guns to loot across the Wonderlands, as each one is randomly assembled from a huge assortment of parts and components with their own properties. But they all belong to one of six basic categories, corresponding to the six types of ammo found across the environments. Here’s what you’ll see in your ever-growing arsenal:

If you’ve got a good aim and a steady hand, Pistols can take you far. These trusty sidearms are great for practicing clutch headshots and picking off rank-and-file targets from close- to mid-range.

Pepper nearby attackers with a barrage of hot lead using SMGs (Submachine Guns, if you fancy) and their high rate of fire. Eliminating tougher enemies will quickly chew through your ammo supply, so try to make every bullet count.

Whittle the opposition down using the solid, sustained damage of Assault Rifles. These versatile tools of destruction are effective at just about any range, provided you keep an eye on how many bullets are left in your magazine.

If you like your fights up close and personal, Shotguns are ideal for blasting nearby baddies. Their wide bullet spread makes them less effective from a distance, but they pack one hell of a punch in close quarters.

Eliminate key targets before they even see you coming with Sniper Rifles, every long-range hunter’s weapon of choice. Granted, zoomed-in scope shots aren’t ideal when a charging skeleton is swinging a sword right in your face.

Make quick work of enemy hordes with the powerful splash damage of Heavy Weapons. Just make sure you don’t miss the few shots you get because reloading is going to take a while.

As you grow stronger during your journey, you’ll unlock three additional weapon slots, turning your Fatemaker into a walking arsenal. Some guns will have added elemental damage types that’ll further enhance their effectiveness or alternate firing modes that expand their capabilities. A gun’s rarity is a good indicator of how far it’ll take you in a fight, with precious Legendary guns having the best damage, stat buffs, and combat effects.

It’s generally a good idea to carry a variety of guns in order to balance your supplies of the six ammo types. Nothing worse’s than hearing the click of an empty magazine during the heat of battle, only to realize you’re rolling with four SMGs and have exhausted all your ammo.

A distinguished group of mythical manufacturers produces the guns found across the Wonderlands, each with its own specialties and distinctive traits. Here’s a general idea of what you can expect from each manufacturer’s wares:

Variety is the spice of life-and-death shootouts, so mix things up with the alternate firing modes of Dahlia guns. These have different behaviors based on the gun you’ve got; for example, Full Auto mode will let you hold the trigger to spray bullets hither and thither, but the staccato blasts of Burst Fire mode mean you’ll have to keep squeezing the trigger if you want a continuous stream of fire.

If you’re a crack shot looking to aerate some skeleton skulls, pick yourself up a Blackpowder gun. Critical hits will cause your bullets to ricochet, damaging a nearby enemy as a bonus. Blackpowder pistols can also unload just as fast as you can pull the trigger, so get to squeezin’.

Don’t settle for inferior weapons. With a small dose of polymorphing magic, Feriore guns can take on new forms as you fling them across the battlefield, like winged blasters and bouncing bombs. Moments later, they’ll reappear in your hands ready to unload all over again!

With the absurdly high firing rate of Stoker guns, you’ll quit worrying and surrender yourself to the steady stream of slaying. All that rapid-fire chews through ammo in a hurry, so make sure you’re well-stocked before you gleefully hold down the trigger.

Torgue heard that you like explosions in your explosions, so he and his manufacturing team made sure that all Torgue guns cause as much detonation and combustion as possible. Some can even shoot magical mines that stick to enemies before bursting into flames, leaving behind piles of smoldering ash.

Through some form of arcane trickery, Skulduggery guns never need to be reloaded as they continuously regenerate their own ammo supply from the aether. But magic has its limits, so you can’t fire forever—eventually, you’ll need to lay off the trigger and let these cool off a bit lest they overheat.

Create some cover for yourself even when you’re on the move with Hyperius guns, which project a magical shield out of thin air whenever you’re aiming down the sights. They’ll also get increasingly more accurate the longer you fire, so unloading a clip in one continuous stream is a great idea.